Seed – on at Circa until 14 February.

It was good to see so many men in the audience of Seed and unexpectedly (or not!) a man played a major role in the performance, adding much of the hilarity to what could have been a very serious portrayal of the business of making (or not) babies.

The play follows four women as they try to get pregnant, stay pregnant or become un-pregnant in a middle class, ‘first world’ setting of sauvignon blanc, apps and air kissing with a heavy dose of medical science and ovulation management.

The bloke in all this (actor Jamie McCaskill) was the many and various incarnations of the sperm donor as well as the Russian female PA at the ad agency, the older female GP, the musician in the bar (yes he can even sing and play guitar) and the woman in labour! A damn difficult role considering being a sperm donor requires one to ‘perform’ in various ways – be it at ovulation time (in the kitchen in between watching the pot boil and setting the table) or into a jar at the fertility clinic, and in other ways in between. The mind may well boggle – you’ll just have to go to Seed to see the other ways a woman needs a man for procreation.

The four female characters were superb bringing quite different personalities and perspectives to what can be a very tortured journey in a quest to reproduce or not. Hats off to Tess Jamieson-Karaha, Emily Regtien, Holly Shanahan and Amy Tarleton for being in character all the way! Each woman portrayed perspectives which many will be able to identify with and fortunately for the credibility of Seed, the outcomes didn’t all have fairy-tale endings.

Go along to Seed at Circa and be thoroughly entertained. You’ll have a good laugh and you’ll also be reminded that the ordinariness of creating a family is in fact extraordinary and always a miracle. 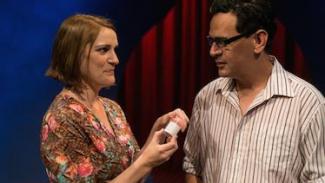